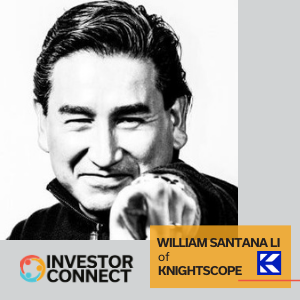 In this episode, Hall welcomes back William Santana Li, Chairman and CEO of Knightscope.

Knightscope builds Autonomous Security Robots in Silicon Valley (Made in the USA!) and their long-term ambition is to make the United States of America the safest country in the world, changing everything for everyone. Their vision is to develop a technology stack to predict and prevent crime utilizing autonomous robots, analytics, and engagement utilizing a “Hardware + Software + Humans”​ approach. Their solution includes providing an autonomous physical presence, gathering data from the environment in real-time, and pushing anomalies to their user interface – the Knightscope Security Operations Center (KSOC) – providing their clients across the U.S. a 24/7 force multiplier effect.

These robots are patrolling across the country 24/7/365 to secure the places you live, study, work, and visit. With over 16,000 investors and over $70M raised since inception, including $10M+ in lifetime revenue, Knightscope is reimagining public safety at a time when the nation needs it most.

Bill is an American entrepreneur with over 30 years of experience and has a broad and deep range of expertise gained from several global assignments in the automotive sector and a number of startups.

At Ford Motor Company, Bill held over 12 business and technical positions, focused on 4 continents, cutting across each functional area. These positions ranged from component, systems, and vehicle engineering with Visteon, Mazda, and Lincoln, to business & product strategy on the US youth market, India, and the emerging markets in Asia-Pacific and South America as well as the financial turnaround of Ford of Europe. In addition, he was on the AMAZON team, which established an all-new modular plant in Brazil. Subsequently, he served as Director of Mergers & Acquisitions.

After internally securing $250 million, Bill founded and was COO of GreenLeaf, a Ford subsidiary that became the world’s 2nd largest automotive recycler. Under his leadership, GreenLeaf grew to a 600-employee operation with 20 locations and $150 million in sales. At the age of 28, Bill was the youngest senior executive at Ford worldwide.

Bill earned a BSEE from Carnegie Mellon University and an MBA from the University of Detroit Mercy.

In this interview, Bill updates Hall on the growth of the company since their last interview, taking into account COVID-19’s specific impact on the company. Bill shares what has surprised him most about the sector and gives use cases for the robots to include fighting crime.

Bill can be contacted via LinkedIn at www.linkedin.com/in/williamsantanali/, via Twitter at www.twitter.com/WSantanaLi, via email at wsl@knightscope.com, and via instant messaging on the website.