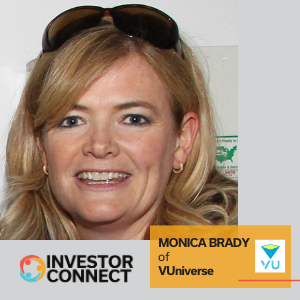 In this episode, Hall welcomes Monica Brady, Co-Founder of VUniverse.

VUniverse is a female and minority-founded company headquartered in New York and is a Delaware corporation. VU by VUniverse provides programming recommendations based on individuality as well as engaging, fun, and insightful features that connect users with every corner of the streaming universe. As a subscription app, VU protects user privacy and security, unlike free navigation apps that trade on personal data. VU saves users time and frustration with a convenient platform for discovering and surfacing the best streaming programming available.

Monica has over 21 years of movie marketing expertise as the Executive Producer and Co-Founder of Trailer Central and The Golden Trailer Awards, which annually recognizes the best in motion picture marketing since 1999. The Golden Trailer Awards is known globally as the “Oscar’s for motion picture marketing” and was nicknamed by the Wall Street Journal as the “Academy Awards for the short attention span”. She has been interviewed by most every major media publication from the Wall Street Journal, to Vice, to The NY Times, CNN, the BBC, CBS, NBC, ABC, for her keen insights into entertainment marketing. Monica studied at Oxford University in England and earned a dual Film and Business degree from NYU’s Tisch School of Film and Television Production. Monica also wrote, directed, and produced her feature film Above All Things, and was recognized as a ‘Director to Watch’ in the Annual New Directors Showcase by SHOOT Magazine in 2017. Driven by her own needs to organize her streaming services, she Co-founded VUniverse in 2019 with Evelyn Watters and Ryan McManus to simplify the streaming experience. Her goal is to save people time and money with VUniverse so viewers know what they have to watch and where they have to watch it all in one easy to navigate app!

Monica shares her thoughts on the growth rate of the sector and how she sees it evolving. She also mentions some of the challenges she has faced and how VUniverse fits into the landscape.

Monica can be contacted via email at monica@vuniverse.com and via telephone at 917-994-1245.