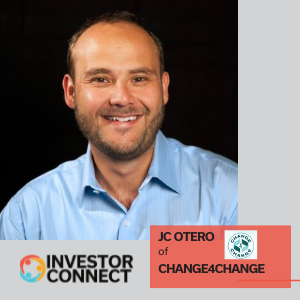 Headquartered in Austin, TX, Change4Change’s mission is to democratize the political fundraising process by broadening the donor base, making fundraising more accessible to all, while combating the influence of big money in politics. It is this monumental challenge that compelled JC to join forces with Nik Kulkarni to start Change4Change in the Fall of 2018.

Through their mobile apps, politically active donors can round up their everyday debit and credit card transactions to the nearest dollar, and donate that spare “change”​ to political candidates and causes they support.

JC’s career has spanned roles in sales, operations, marketing, and management with large companies such as Informatica, a world-leading data management company, Dell (prior to going private), and Wells Fargo, while also being an early employee with tech startups such as nDivision, which went public in 2018, and BestFit Mobile, which was acquired by Software Paradigm International in 2015. JC also co-founded one of Austin’s first green cleaning companies and sold his stake in 2009.

Outside of being an early-stage startup employee, JC has also been involved with more mature startups in FinTech, Buzz Points who raised over $25M since its founding in 2009, and in the Cryptocurrency space, Cointerra who generated over $35M in revenue its first year manufacturing ASIC machines for bitcoin mining in 2013 where he helped launched one of the world’s first cloud-based mining services in 2014.

Outside of work, JC is very involved in the community, both locally and internationally, is an avid reader with an insatiable appetite to learn, and loves traveling the world. To date, JC has been to 29 countries across 4 continents.

Community accomplishments JC is most proud of are in helping build the largest deaf empowerment NGO in Kenya, being an early catalyst and champion for at-risk youth, entrepreneurship efforts in Central Texas, and his Emzingo NexGen fellowship in Peru with the National Red Cross.

JC discusses how he sees the industry evolving and how Change4Change fits into the landscape.

JC can be contacted via email at jc.otero.atx@gmail.com, and via LinkedIn at www.linkedin.com/in/juancarlosotero/.