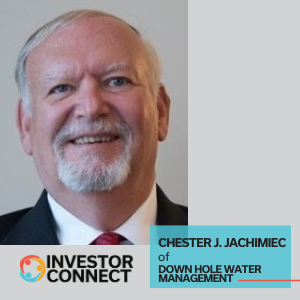 Down Hole Water Management has developed and patented a downhole separation system for disposing of produced water from natural gas wells (the “DGWS” – Downhole Gas/Water Separator) and from oil wells (the “DOWS” – Downhole Oil/Water Separator) in the same wellbore, eliminating the need (and significant operating expense and environmental risks) of lifting the contaminated produced water to the surface and hauling it to a separate disposal well. The DGWS system has been demonstrated in numerous live wells and is ready for commercialization.

Chester has 40 years of professional, entrepreneurial, and large company business experience, and has developed several companies from concept stage to full public company status. In the last twenty years, he has founded three companies that have gone public, including one of which grew to Fortune 1000 size.

Chester has been a close advisor to the Finley companies since early 2017, acting as the CFO of the enterprises and involved in their various operations and investments. Prior to that, from 2012 to 2016, he was a founder and board member, CFO, and ultimately President of Vivione Biosciences Inc., a medical device company taken public on the TSX-Venture Exchange.

From 2005 to 2008, he was a founder, director, and EVP of Production Enhancement Group, Inc., an upstream energy services company involved in coiled tubing, pressure pumping, and wireline services, and rental tools, and taken public on the Toronto Stock Exchange. From 2001 to 2005, he was President of SPI Petroleum, LLC, a private equity-backed consolidation of fuels and lubricants distribution companies that ultimately grew to over $4 billion in revenue and became the largest company in its industry. From 1996 to 2001, he served as a founder, director, and EVP of Encompass Services Corporation, a public company and national provider of mechanical, electrical, plumbing, and janitorial services, with over $4.5 billion in revenue and 35,000 employees. From 1994 to 1996, Chester served as Director of Acquisitions and Investments for Tenneco Energy, where he created and led a group to diversify the company away from regulated assets (pipelines) and redeploy capital in a higher return, non-regulated businesses (independent power plants; pipeline services). From 1990 to 1994, he served as a consultant to a number of companies, assisting them to secure capital or engage in acquisitions, MBOs, or other transactions, and managed his personal investments in oil & gas and technology commercializations.

Prior to 1990, Chester practiced law in the areas of Securities and M&A in Houston and Dallas and was a partner in two large national law firms. He was also licensed as a CPA in the State of Illinois and practiced public accounting with Price Waterhouse prior to attending law school. He received a Bachelor of Business Administration degree in public accounting (1976, with honors) from Loyola University of Chicago and a Juris Doctorate (1979, with honors) from Northwestern University of Chicago School of Law, where he served on and was published in the Northwestern University Law Review.

Chester shares what excites him right now in the oil and gas space. He advises investors, shares some of the technology behind his product, and discusses challenges for the oil and gas operator in today’s market.

You can visit Down Hole Water Management at www.downholeinjection.com.

Chester can be contacted via email at cjachimiec@att.net, via LinkedIn at www.linkedin.com/in/chester-jachimiec, and via phone at (713)628-6582.