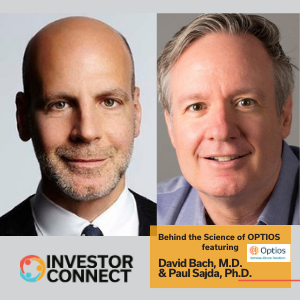 In a follow-up to our recent episode featuring Optios’ CEO David Bach, M.D., today Hall welcomes both David and Paul Sajda, Ph.D. professor at Columbia University to discuss the science behind Optios.

Optios is a leader in the rapidly-emerging neuro-­performance industry. Based on more than a decade of work at DARPA, hundreds-of-millions of dollars of proprietary research, and close partnerships with the world’s most elite organizations, Optios’ guiding mission is to build an intellectual framework and platform that supports the next phase in human development. Neuroscience is the next frontier in management. Optimizing leaders’ brains will soon be a critical source of competitive advantage in the business world.

David Bach, M.D. is a Harvard-trained scientist. Prior to founding Optios, David was a serial entrepreneur, venture capitalist, management consultant, scientist, physician, martial artist, and professional cellist. As an entrepreneur, he founded and built three prior companies: Touchstone Health, Empyrean Benefit Solutions, and Leprechaun HCC Management. Each of these became a $200M+ enterprise. His venture capital experience was with TA Associates in Boston.

After spending a decade maximizing his physical and mental performance, David created Optios to bring scientific rigor to, and create commercial applications in, the rapidly-expanding arena of applied neuroscience.

Paul Sajda, Ph.D. is a Professor of Biomedical Engineering, Electrical Engineering and Radiology at Columbia University and Director of the Laboratory for Intelligent Imaging and Neural Computing. Prior to joining the faculty at Columbia, Paul was the head of Image and Signal Processing at Sarnoff Corporation in Princeton, NJ. His areas of expertise include computational and experimental neuroscience, neuroimaging, neural engineering, and computational modeling. He has received numerous awards for his research, including an NSF CAREER Award, and has been elected a Fellow of the IEEE, a Fellow of the American Institute of Medical and Biological Engineers (AIMBE), and a Fellow of the American Association for the Advancement of Science (AAAS).

You can visit Optios at www.optios.com.